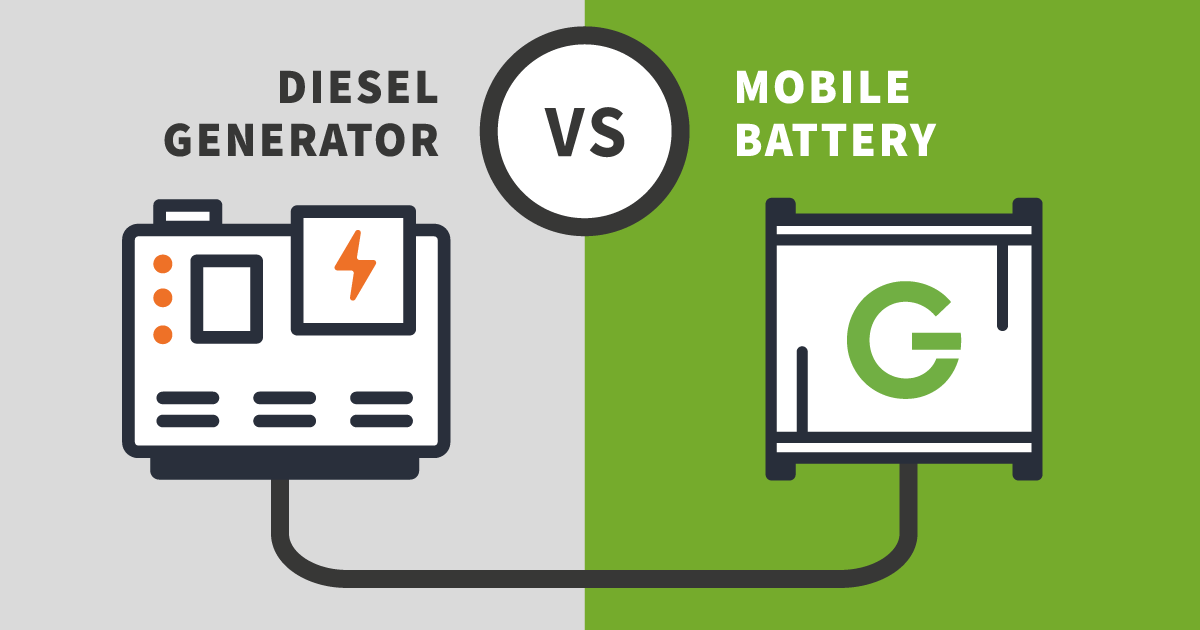 In the energy industry, mobile batteries are often seen as a replacement for diesel generators. However, this comparison is often not accurate, since the purposes of both machines differ. In this blog post, we will explore five of the actual differences of the two powerhouses, not only in how they are built, but also the effects of their use. Take this as a guide for exploring your options of energy supply.

On the most basic level, a diesel generator and mobile battery perform different tasks. On the one hand, the generator generates energy from fuel with a motor. The chemical energy stored in the fuel is converted into mechanical energy by combustion, so small explosions inside the motor. This is in turn converted into electrical energy by using an alternator, which uses the mechanical energy to spin its main rotor in a magnetic field. As a result, an alternating current (AC) is produced, which is electricity. Therefore, no other energy source than a constant flow of diesel is necessary when using a diesel generator. When using a diesel generator, in most applications the generator will be turned on and run at a constant level of power. Therefore, it is necessary to know of the highest peak demand to ensure that the generator can always supply sufficient energy. Additionally, a diesel generator with a surplus of power might be chosen to ensure that the supplied energy is sufficient, especially when the energy demand is unclear, or changes of demand are expected.

A mobile battery on the other hand stores energy. It can be connected to one or multiple energy sources to buffer energy for later and optimal use. Especially when there are high fluctuations of the energy demand, an energy storage solution can ensure through peak shaving that necessary power is always available. This is done by storing the electricity when there is high production until the battery is charged and then releasing the electricity when there is a demand for it. With this method, even relatively small energy sources can be leveraged to supply a much higher power with a battery as a buffer in between.

It is already in the name. Diesel generators, of course, normally use diesel fuel. These generators use an internal combustion engine, which can be compared to that of a diesel car. By using compression, the diesel fuel is burned in the injection chamber, which then releases energy. Since diesel is already widely available and known as a reliable and powerful fuel, it is understandably used for many purposes. Additionally, it can be easily stored. However, diesel fuel also leads to high carbon and nitrogen emissions and the diesel prices have been increasing in recent years.

There are many options for mobile batteries regarding the actual energy source. Depending on the situation, it can be as easy as connecting the battery to a grid connection to boost said grid connection and then the type of electricity used depends on which electricity is fed to the grid. Next to that, there are also more sustainable options, such as connecting the mobile battery to solar panels or a wind park. In that case, no emissions are directly produced, and the battery can ensure that the energy is always available.

Some of you might have sat in an electric car before. The acceleration time of an electric car compared to a car with an internal combustion engine (ICE) is in general faster. In fact, the fastest production car to race one mile (400 meters) on the carwow leaderboard is currently an electric car, the Rimac Nevera, with a time of 8.6 seconds. The same applies to mobile batteries and diesel generators. Since mobile batteries are using electricity for all internal operations, as well as external, the start-up can in general be much quicker than the one of diesel generators. The start-up times can also be influenced by aspects, such as the external temperature, the connection to another component which requires synchronization and different generators and batteries, may also differ in how quickly they start-up. This difference in start-up times is especially important when using a mobile battery as a back-up energy source since it can react swiftly in case of a power failure.

As already mentioned, diesel fuel is known to be a pollutant and has gained a bad reputation in recent years. On average a diesel car for instance produces about 2.62 kg CO2 emissions (FleetNews, 2020)[1] and 50 to 1000 ppm nitrogen emissions per liter of diesel (Dieselnet, 2020)[2].

For batteries the emissions depend on the specific set-up. In the table listed below, our Data analyst Minou Grimbere has compiled data on how much diesel and running hours we have saved during our projects. This is a comparison to the case of diesel generators being used instead of the battery or a combination set-up. While the combination of our battery with a grid connection or solar panels is the most sustainable option, even a combination with a diesel generator alone in an off-grid situation can save between 40 – 50% of diesel and 70 – 75% of the running hours. We have included the running hours in this case, since the direct emissions produced by diesel generators, as well as the noise and stand-by consumption are reduced by saving those running hours.

Diesel generators work with compulsions in the engine. Therefore, the noise level is high. During research conducted by Arbouw on “Lawaai in de Bouw” (noise in construction), it was found that on average the noise produced by a hydraulic generator, like an ICE diesel generator, is around 100 to 105 decibels. Looking at the calculation of decibel (db), we need to keep in mind that an addition of 3 db expresses a doubling of noise. Additionally, the employer must provide ear protection for employees when noise levels exceed 80 db according to the Dutch law. This restriction was chosen because above 80 db noise is harmful to the human ear (Stichting Arbouw, 2002)[3].

Because of the emissions and the use of diesel fuel, a strong smell of diesel accompanies any running diesel generator. This can be unpleasant for any people, who must work in close vicinity of the generator. With newer generations of generators, different filters and better technologies are used to be quieter and less polluting, and in turn less strong-smelling. Additionally, diesel engine emissions are toxic and in the construction industry workers often risk high exposure due to equipment and traffic close to construction sites. Diesel exhaust mostly affects the lungs and respiratory tract (van Thienen & Spee, 2008)[4].

Since batteries use electricity, the noise pollution is much lower when compared to a diesel generator. The loudest part of a mobile battery is the air conditioning. Additionally, there are no direct emissions and unpleasant smells associated with the use of a mobile battery.

Efficiency is another factor, which is essential for sustainable energy practices. With an average diesel generator at its optimal loading of 65 – 70% generate approximately 3 kWh per liter. This translates to a 30% efficiency when converting fuel to electricity. This is an approximation and can differ according to the type of generator, the optimal load, and other factors. Newer generations of generators can have a higher efficiency and the provided percentage is calculated from our data.

With batteries, the conversion of AC to DC and the other way around can also lead to some losses. In general, an efficiency of 85% is observed. While this is in general a higher number than the efficiency observed in diesel generators, it is important to keep the energy source in mind. By combining the battery with the grid, a diesel generator or sustainable energy sources, the efficiency can be improved, since the electricity is available when necessary. Furthermore, the diesel generator will only be turned on when necessary and at its optimal load, which additionally increases the efficiency of the genset, which normally might work at an inefficient load for long periods of time. To ensure that the generator and battery work together perfectly, extensive preparation and data on energy consumption are necessary to accurately assess the use and impact of batteries.

In this blog post, we have explored the differences between mobile batteries and diesel generators. We can see that there is no clear-cut solution for every single project and that both products have their place in the market for different purposes. But with this guide on differences, we hope to have given you a deeper understanding, so you are well-prepared for any energy challenges coming your way.

[3] Link to the research article: https://docplayer.nl/20067487-Lawaai-in-de-bouw-arbouw-advies-voor-de-bouwnijverheid.html

[4] Link to the research article: https://www.arbeidshygiene.nl/-uploads/files/insite/2008-01-thienen-en-spee-trf.pdf

In this infographic, you can see a simple summary of the five difference we discuss in this blog post. Feel free to share this infographic if you found it helpful and please include attribution to greener.nl when sharing. 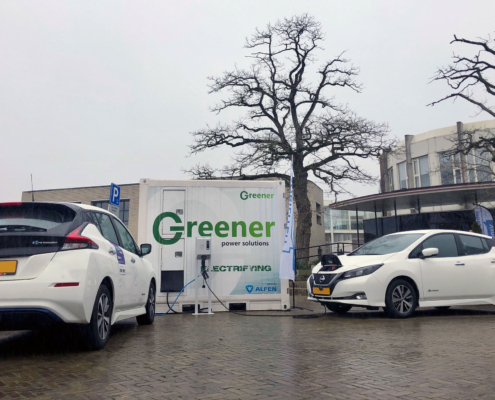 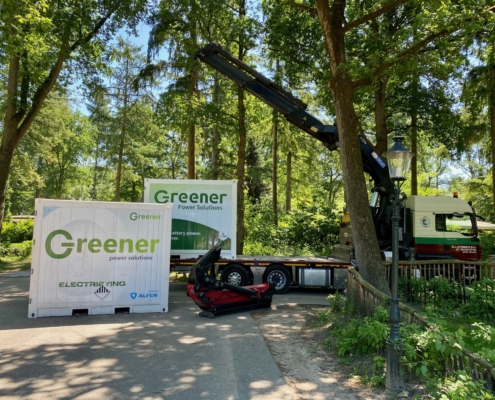